A downloadable game for Windows, macOS, and Linux

The Kickstarter is over and was an success! We are still accepting late backers via paypal till the beta in February/March 2019.

Or join the community on Discord

As the youngest heir of an ancient bloodline of proud Monster Keepers, you step out into the world to follow in your ancestors' footsteps. You will gather a party of monsters to grow and train. Meanwhile, a series of unsettling events worries the experienced Keepers of the Monster Sanctuary. This is the beginning of a journey to unravel the cause of this mystery that threatens the peace between humans and monsters.

Monster Sanctuary is the idea of combining monster collecting, turn based combat and metroidvania-like exploration. Any monster you encounter can become a part of your own party. Additional monsters provide a lot of tactical options in combat or allow you to overcome certain obstacles to explore new areas.

Every monster has a unique skill tree. This lets you individualize your monster to pursue different strategies. Feeding and equipping your monsters to improve their stats further emphasizes this aspect.

The combo system gives additional depth to the combat. Each individual hit increases the damage of the next moves within the same combat turn. The loot system challenges you to find the quickest and most efficient way to end a battle - rewarding you with better loot. Grind and find the best combo to earn the rarest monster eggs!

How about releasing the full game on itch?

When is the next update on itch coming out :D

How about making it the full version.

Its been made, and is available on Steam.

I think he means here on Itch

Love it just love it

Thanks for this great game.

cant use the mac version but i'm a mac user

Looking for some ideas for my own project i found and tested your game her. Grabbed it, installed it, played it, got sad when i reached the end of the version here.
Disvored it on Steam and bought it right away.
I saw some people  on steam complain about the platformer style gameplay. Me myself as someone that generally dislikes platformers had a great time with the "demo" version here.
Now... nuff said gotta get my job on as a Keeper :D

This game was so fun to play.  I played it way more than almost every game I've played on this website. I can't wait for the full version. 9.5/10

This game is awsome so far. This is everything I love about video games in what I feel is a  love letter direct to me. Light Platforming, RPG elements, great turnbased combat,  monster collecting. Wish I had known about the kickstarter.

I want the new update please!I love this game!

any news on next update? i absolutely adore this game

Hi! Just finished this awesome demo of yours and i decided to sum up some of pros and cons of this wonderfull game (or demo at least).

-Player gets less rewarded for taking hi-risk fights. (I mean, you get less rewards becouse you fought longer. Which leads players to low level farming and not using Inifinity Arena)

Those are important (i think) and now those a bit less

- No crouching (yea wierd, but there was a moment when I would get any chance to get past some birds )

- Some thinks dont have to be explaind. It's easy to figure how combo works ;) and you can leave it in library (just like in good old Zelda titles) or add tutorial tab in menu.

-In battle  my monster stats, becouse i would calculate if that burn/poison will kill my enemy or do I have to hit him one more time. (but if you want you can leave this that way, it's a matter of disign)

- Last thing. Double jump is cool but player can avoid lots of combat becouse of it. (as well you can leave it that way)

-I had a lots of fun playing this demo

-Every battle that i encountred was always full of danger, antycipation, ups and downs. They are fresh, not like most of AAA fights (I was comparing to Dragon Quest XI , old Final Fantasy I-III and Persona 5).  I won almost all fights that I encountred and felt a lot of joy (also from losing).

-It's just demo but there ale lots of monsters with uniqe skills. I thought that you don't implemented mobs with AOE attacks and BAM!!! New monster aperad with fire AOE that almost melted my party. Also there are alwas at least 3 new skills with monster (and one or two olready seen) which just blew my mind with posibilities to potential builds (I mean I thought that I might do some crazy uber badass buidls, but this probably be able in full game) . So yea,  crazy tacticks!!!

-As mentiond earlier you can avoid battles. Not like in pokemons (the lame way) but you have to show your true power in avoiding enemies phisicly. (Spoiler: enemies sometimes rush on you when you try to pass them XD)

-And at the and Arena. I was about to put it in negatives of the game, but it is too well crafted. I've seen couple games (apk) that tried to do this, but they totally failed. Not like this one.

All right if you made it here. Just stop reading and try this game for yourself. I might be wrong but this game will be 10/10 after release.

P.S. Found a graphical glitch. Whenever I use Shield skill, background sprites are flashing (apear and disapper sometimes in diffrent order than should).  Maybe becouse of Update method (I would try Fixed one, but I've never done 2D game in Unity). Glitch is totally repeatable.

not sure if this is just a version thing, but there are some stone blocks that look to be destructable in the same way some vines were, one of these sets of blocks is a colum of 2x7 the other is horizontal 2x11. i am unable to pass either with any of the almost complete collection of monsters i have, using them in the same way you break vines and hidden room entrances with.

A gameplay in spanish here ->

I honestly can't put into words how much I love this game. Pokemon was always a favorite of mine, but this takes it to a whole new level. 10/5

This game is such a gem. It's exactly what I wish pokemon was. Each creature has multiple build paths in their skill tree so it's more like a character tthat you get attached to, not to mention the plethora of abilities they give you to traverse environments. The game is already out in early access on Steam, so definitely give it a shot if you haven't!

This game is absolutely amazing. I can only recommend it and wish for sequels and updates.

This Game is Amazing and so much fun, I love the simple and easy to understand combat, and the artwork is amazing, I love every aspect of this game, and everything is perfectly balanced!

gave me a terraria vibe along with pokemon with its own little twists to make the player have a unique experience unlike other games,amazing

This game is pretty neato. I had a lot of fun with the turn based mechanics and can't wait to see this get developed further! :D

i literally LOVED this game! i highly recommend it!

such a beautiful game

Does Moi Rai Games have an Public Development Road map out? Something for the user-base to see the general % of the completed game?

I recommend this game a lot!

Just released the second demo version here and also launched the Kickstarter for the project!

Played trough the game, and overall, really great . Nice art, game concept, even the soundtrack is on point! Looking forward to the full release. Despite this, I had some problems (bugs) while playing. If you run straight on the wall beside the first chest (on the mountain pass), the game will stop responding. Also, during some battles, if you check the buff info, the game will also stop responding. Still, this game is preety worth  a 10/10  rating. Great game!

Me and the kiddo had a lot of fun with this one, reminds me of the snes rpg games with a touch of pokemon.

Ok, played through the entire thing, and REALLY liking it...

Just one thing, we NEED an option to swap out monster skills (a little more customization mostly)

Pls do for mac os x

yeah i plan to do it as a stretch goal for the upcoming kickstarter. I would love to have the game on the switch :)

I've been following this game for over two years now when I first found gifs of it on Imgur. I downloaded the demo on Steam a while back and absolutely loved the game! It's everything I've ever wanted it to be. When this game finally does release in full, I hope there will be some kind of ultimate collectors edition because the developers deserve every penny! 11/10 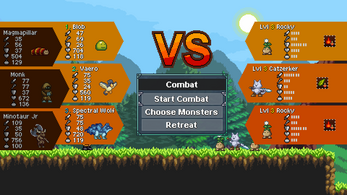 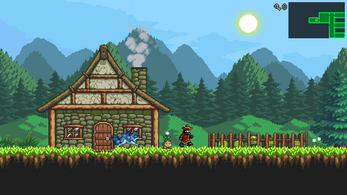 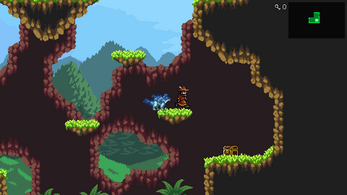 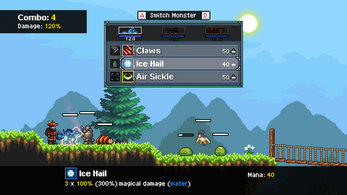 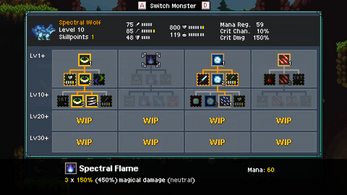 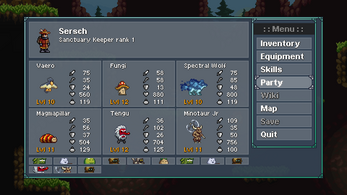